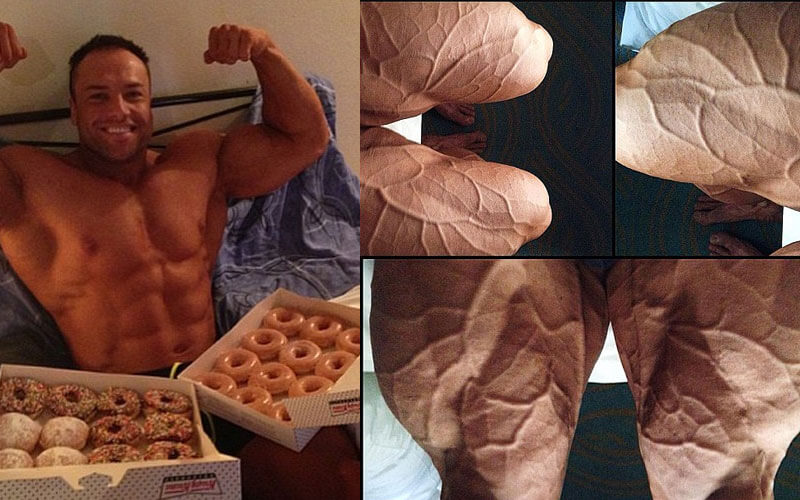 Australian professional bodybuilder Josh Lenartowicz is 275 Lbs of pure shredded muscle – Many refer to him as a local idol at the local gym he participates at, Brunswick Gym.

Many have questioned his size and physique and have asked about his steroid and growth hormone usage, in which he answers: “I’ve never cheated in my life”, suggesting that he has extremely good genetics and more so, a strict diet.

His journey hasn’t been easy, as many bodybuilders can attest too – This image of him from 2013 (left) and 2015 (right) has many people pointing the finger at Steroid and GH usage. According to Josh, the image on the right was taken right after his 2-week honeymoon that didn’t allow him to hit the gym once. His continual growth lead him down the road of many competitions where he eventually started to really need to put on some major mass – or essentially trying to maintain his bulk 24 hrs a day.

Josh is said to be eating upwards to $700 worth of food on a weekly basis while maintaining a grueling workout schedule full-time. His meals are divided in 6 to 10 daily meals that incur upwards to $700 a week – lucky for him, he is now sponsored by a protein meal company that has cut his costs of food down tremendously.

He mentions that “it takes sometimes 30 minutes to eat a meal”,”it’s like your feeding six or seven people…. The meals are quite bing…”. As of 2 yrs ago, he has dedicated to the sport of Bodybuilding 100%, going into this Full-time as an IFBB Professional.

Soon after, he reached his goal of going to the Mr. Olympia as well as the Arnold Classic, after recently winning the 2015 IFBB Ferrigno Legacy. Here’s a great video about his journey to becoming an IFBB Pro along with some of his history.